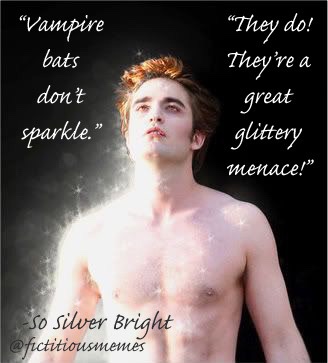 As a rule, I am impatient with the gaggle of quirky, silly sidekicks that populate many books and movies for the sole function of comic relief. Fantasy books are particularly egregious offenders in this regard because there is an abundance of lesser creatures that can be employed as throwaway comic characters with funny speech patterns or antics (e.g. the House-elves in Harry Potter, Gurgi from the Chronicles of Prydain). The Theatre Illuminata series by Lisa Mantchev is no exception, hosting as it does the quartet of fairies in attendance on Titania in Shakespeare’s A Midsummer Night’s Dream: Peaseblossom, Cobweb, Moth, and Mustardseed.

They and their incessant childish antics are rather to be sighed at and endured than actually laughable. But there was one exchange of theirs that caught my attention because it was so blatantly Twilight shade on the part of Mantchev.

Ariel…recalled his butterfly familiars from the skies, and they flocked to him with eager wingbeats.

“They do! They’re a great glittery menace!” Moth countered.

Moth has been travelling with Ariel and the others since book 2, he knows perfectly well what Ariel’s familiars look like, there is no reason for him to associate them with bats, let alone specifically vampire bats—besides the fact that, as I said, the fairies, including Moth, are generally idiots and say random things in an attempt to be comedic. There is no call for this kind of throwaway dialogue except to make fun of the concept of sparkly vampires. Which I’m all for. The making fun of, that is.

But somehow, even Meyer’s patent absurdity in making vampires avoid sun because they glitter (like, really, don’t regular lightbulbs also reflect off multifaceted surfaces?) doesn’t compare to the too-perfect reality that is Robert Pattinson also playing Gotham’s favourite bat in the upcoming movie. If only they had given him glitter eyeshadow instead of the Winter Soldier special, the perfection would be complete.