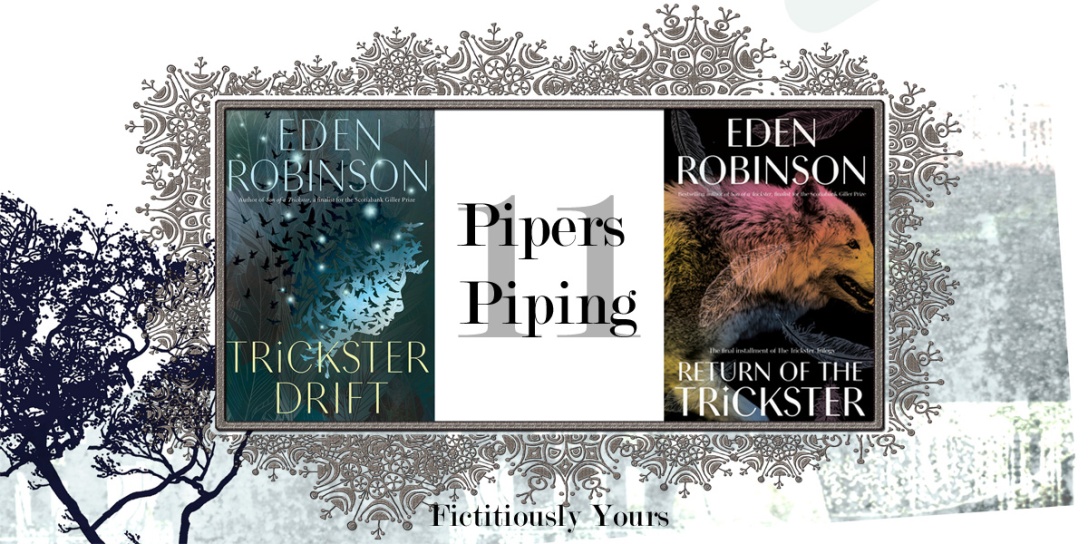 When I read the first book of this trilogy, Son of a Trickster, by Eden Robinson with its snarky voicing and wacky scenarios, I really enjoyed it. The mysticism of the Native trickster Wee’git (who is also literally a “wee git”) is the starting point for a well-built urban fantasy story. Although the excessive substance abuse and some other content depicted made me hesitate to continue reading the series, I decided to give book two, Trickster Drift, a try and I loved it and immediately had to go and read book three, Return of the Trickster.

It’s been a year since Jared almost died after going on a crazy bender with his girlfriend and mistakenly broadcasting his presence to a group of disgruntled, shapeshifting otters. He lost a toe and his girlfriend, and committed to sobriety so nothing like that could ever happen to him again. Unfortunately, he’s still a son of the trickster, drunk or sober. And the otters aren’t the only ones looking for someone with as much mojo as he is proven to have. He attracts magic and spirits like lint to a sock, no matter how many times he dutifully smudges his apartment.

Moved out of party city (aka his mom’s house), Jared is enrolled in university, looking to make something of his life, reconnecting with grandmothers, old and new, and dodging his mother’s psychotic ex who is stalking him. A ghost who loves Doctor Who, a grandma with a reptile under her skin and a wolf pack for relatives, a doorway to an interdimensional pocket universe painted on the bedroom floor by a paranoid artist named Edgar Six… Jared never knew living with his aunt could be this much fun. Until things start trying to eat him, of course.

Jared’s journey picks up without much fanfare, beginning slowly while he navigates uncertain housing in Vancouver and gets settled in with his mom’s sister, who doesn’t believe in magic but believes in civil disobedience for social change. It is, as always, an eclectic group of characters living in his aunt’s apartment complex—cousins, step-siblings, a zombie ghost, the usual—providing some really fun colour and personalities for Jared’s third-person limited perspective to comment on. Though a large portion of the book is seemingly uneventful plot-wise, there is a thread of tension running through it as, not only is Jared being openly stalked, but he is also maintaining his hard won sobriety. And, like in the first book, the supernatural menace emerges with a vengeance at the end, culminating in a showdown in another universe.

Jared is the type of guy I would like as a friend—down to earth, randomly cooks and cleans, wicked dry sense of humour. A good listener who also knows how to just be in someone’s company without having to chat. His struggles with his family, his addiction, his power, and, tied in with them all, his identity are really compelling and although he doesn’t always know what the right thing to do is, he keeps going.

Return of the Trickster

After an explosive ending to the second book, Return of the Trickster starts off with Jared having to come to terms with what he had to do to survive in the other universe—and starting off on day 1 of his sobriety again. Back at his mother’s house, that doesn’t last long. After a rocky beginning with a few binges, struggling to keep his emergent magic from eviscerating him, Jared tries to get himself on track with the help of a descendant of the sea-otters, a yeti, and his absentee trickster father, who turns out not to have been quite so absentee as Jared thought.

An unexpected loss tears into Jared and he finds it necessary to try and protect those around him, tapping into his power to bend the spirits to his will, risking the literal loss of his internal organs. Despite the lurking, unsubtle presence of the rest of the wolfpack who want Jared to bring their matriarch back from the alternate universe, Jared’s family rally around him to fight the threat to his existence; in the process he discovers a thing or two about his family and how he came into existence in the first place.

It’s a third act, and Return of the Trickster concludes everything in a colossal bloodbath of undead shapeshifters, runaway livers, witches and witches-in-training and… Richie. I don’t know what else to say. It’s a good ride.

1 thought on “The Eleventh Day of Christmas: Trickster Drift & Return of the Trickster”