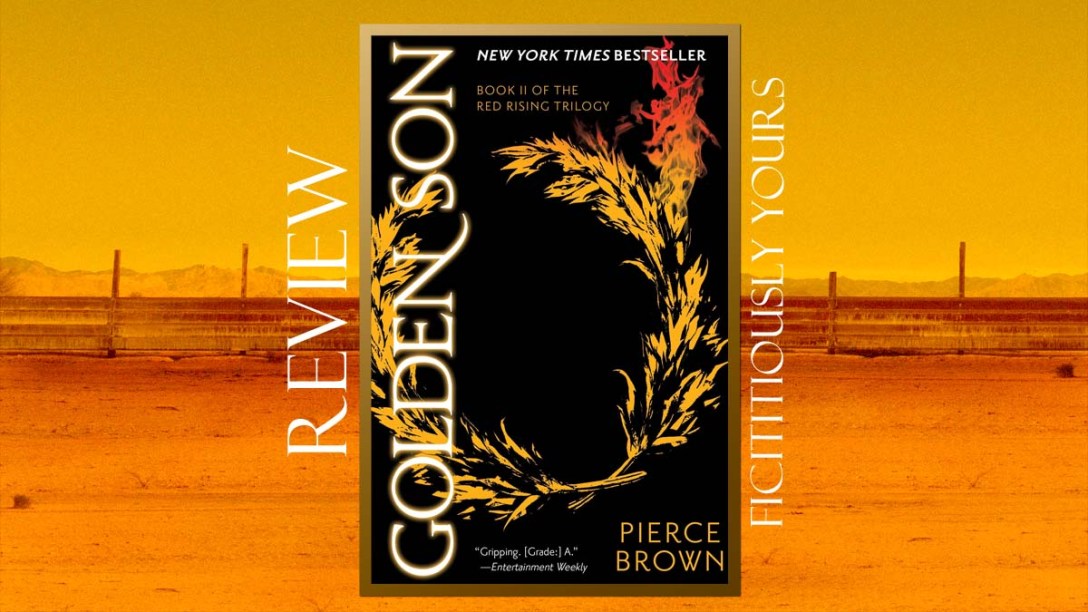 As a Red, Darrow grew up working the mines deep beneath the surface of Mars, enduring backbreaking labor while dreaming of the better future he was building for his descendants. But the Society he faithfully served was built on lies. Darrow’s kind have been betrayed and denied by their elitist masters, the Golds—and their only path to liberation is revolution. And so Darrow sacrifices himself in the name of the greater good for which Eo, his true love and inspiration, laid down her own life. He becomes a Gold, infiltrating their privileged realm so that he can destroy it from within.

A lamb among wolves in a cruel world, Darrow finds friendship, respect, and even love—but also the wrath of powerful rivals. To wage and win the war that will change humankind’s destiny, Darrow must confront the treachery arrayed against him, overcome his all-too-human desire for retribution—and strive not for violent revolt but a hopeful rebirth. Though the road ahead is fraught with danger and deceit, Darrow must choose to follow Eo’s principles of love and justice to free his people.

He must live for more.

Over a year has passed since the first book, Red Rising, both for main character Darrow and for me since reading it. In the interim, Darrow appears to have lost sight of his purpose and I, sorry to say, have lost something similar while reading this sequel.

First, what did I like? Once the story got going, it was going. Unfortunately, in a similar vein to the first book, Part I was a draggy, disconnected, ultimately pointless snooze-fest. It took Part II to actually kickstart the plot. In fact, the memory of how the first book got better after Part I was what kept me reading this book past the 30% mark.

I’m glad I gave it a chance to get better, because it did, and that I completed the book for the personal satisfaction of knowing that, unlike some claims, the second book is not better than the first. Now I have the information I needed to make the decision not to read more books in the series, or more spin off books in the world, or more books by the same author ever again. It’s nice to have that closure–I came, I saw, I gave it a fair shake, and I am moving on to other things better worth my time.

On the other hand, per my 30% rule, I am not happy I didn’t DNF it because after my already mixed feelings about Red Rising, I could have known from how it started that Golden Son wouldn’t fare any better and saved myself three plus hours of reading and aggravation.

Firstly, our main character was hard to connect with or even pin down what exactly his character is supposed to be. He went through some interesting developments in Red Rising, and I was looking forward to seeing how it played out in his service to Augustus, the man responsible for oppressing the Reds and having Darrow’s wife, Eo, executed. Built-in drama, one would think. But no, instead we get a time jump of a year during which Darrow has somehow lost Mustang and proceeds to lose his position in Augustus’ household, all through doing nothing in particular very important to the ultimate goal. All that build-up from the ending of Red Rising deflated in one fell swoop of time-jumpery.

Instead of seeing the direct repercussions of his last minute, critical decision to work for his enemy, we just get another day-in-the-life type of routine from the opening. If this guy doesn’t know how to write beginnings, he doesn’t really know how to write satisyfing closures either. And unfortunately, it doesn’t matter how good your middle is if the reader never gets there because they were bored to tears by the beginning, or if you disappoint all your setup by writing an inconclusive conclusion.

In Red Rising part of what made things really compelling and interesting was Darrow’s betrayal of Cassius, the one person who was his closest friend and supporter. When the betrayal was revealed and Cassius was turned against Darrow, I wanted there to be a solid confrontation which would lend some emotional weight to the fight. Instead, we got the Jackal. And surprise, surprise, in Golden Son, do we get more of Cassius instead of the rather bland and predictable Jackal? Not a chance.

We get one duel, which was compelling enough, I will admit, but then Cassius disappears for the rest of the book only to be spoken of in significant whispers and regretful ruminations on the part of Darrow. And it’s not really believable, either, because Darrow has already expressed so much animosity and disdain for Cassius (barely acknowledging that the reason for their feud is because Darrow mudered Cassius’ brother, let alone showing remorse for his action) that his (Darrow’s) belated bemoaning of the fact that his actions may have turned an otherwise good man (Cassius) into a monster comes across as patronizing and incredibly arrogant. And this is a consistent pattern in Darrow’s views of other characters too. As if his interactions with people are the determining factor in their character development. As if he is the singular prime mover of the universe. Definitely no overinflated ego here.

It is an understatement to say that Darrow is grandiose. I can’t think of another word for it. I was going to say melodramatic, but that isn’t quite it, either. Grandiose captures the essence of his internal monologue in the form of narrative. And it’s not very convincing. It’s like, these are the words the author has to put in his mouth in order to remind the reader that they’re supposed to root for him, sympathize with his cause.

It doesn’t help that it is in first person POV, and present tense. That worked for the Hunger Games, but mainly because we were actually interested in what Katniss was experiencing and knew whatever she knew, therefore the twists came as actual surprises to us as they did to her. With Darrow, the POV leads to him being an unreliable narrator because he’s supposed to be the one coming up with the clever plans we don’t see coming, so he doesn’t give us all the information from the get go.

But then why is he telling us anything? It comes off as writerly and calculated rather than natural once you start selectively narrating what is supposed to be someone’s true POV. And when he does do something clever, it comes across as all self-congratulatory because it’s his voice presenting the triumph. Sort of makes you hate him, to be honest.

Darrow frequently comes across as arrogant, prejudiced, distant, intentionally cruel, and deceitful. And some of it stems from what we are supposed to believe has carried on from the interesting development of his character in the first book when he seemed to be getting lost in his Gold identity. Darrow is indeed being influenced by his disguise as a Gold, being integrated into Gold society and forming bonds with Gold friends. So far so good. It just makes his motivation more complex and conflicted because now he has to recognize that these are people too.

But if you take that to an extreme where he has a hard time remembering being Red or a conscious resistance to the Gold identity on his part, suddenly his mission, which hinges on him not being a Gold and holding views that are contrary to their worldview, becomes a problem.

For instance, this guy who is supposed to believe in the inherent value of all the colours is looking down his nose at the Blues, using derogatory language about how air-headed they are? Like, buddy, do you even hear yourself? You realise they were genetically engineered that way, right? You also realise that if you are looking down on them because you’re a Gold, the truth is you’re actually a Red, and so you’re even lower than Blues in the hierarchy? Right?

I can’t even tell you how far my eyes rolled back into my head when the “his wife was pregnant when she died” card was pulled. Like, besides how much more it made me detest Eo as a character, how lazy with thinking up character motivation for Darrow do you have to be? Just say Darrow has no desire to help liberate mankind unless he has been repeatedly personally victimized by the powers-that-be and leave it at that. At least it would be honest. How can you grieve something you didn’t know you lost? How do you get angry over losing something you never had?

Well, I’m angry over this story losing the potential it had to interest me further. Because you can see how good it could be, and sometimes is. The action is pretty good, the atmosphere is sometimes impressive, particularly on the different planets, the cast of characters is interesting enough to keep you invested in their various personalities and dynamics. The concept: definitely not lacking in complexity, tone, or style.

But then the characters act out of character for no apparent reason beyond plot convenience, and the writing is just so jarringly writerly, and the declarations of freedom from tyranny and human equality sound so slogan-y and rehearsed and insincere coming from Darrow, who couldn’t see the value in any of it until he was, again, personally victimized by the powers-that-be. Which isn’t a good way to come across when that’s supposed to be the whole motivation for all of the actions taken.

And the other characters couldn’t save it. I like Mustang, I like Sevro, I would like Cassius if he was actually present for more than a scene and a half. I liked Roque well enough. I liked Tactus. I liked Victra. You know what I couldn’t stand? The way Darrow treated and thought about them. He is such a sanctimonious prick, thinking all the time about how clueless they are and how they depend on him and how wonderful they have the potential to be, but he doesn’t know if he can enable them to realise it and yada yada yada. Oh, and he’s betraying them all this time by simply existing, because he’s really a Red in Gold’s clothing.

Well, if that’s the way you think about it, what are you doing? If you actually believe this is a betrayal and not a justified cause, why should we think anything better of it? The whole thing is just mixed signals and inconsistent logic from alpha to omega.

And don’t even get me started about Roque and the ending. I don’t want to talk about it. Suffice to say, “cheap cliffhanger” and leave it at that.

Oh, and Ares? Mythological freedom fighter and god of the Red planet, house Mars? <shakes head and walks away sadly>