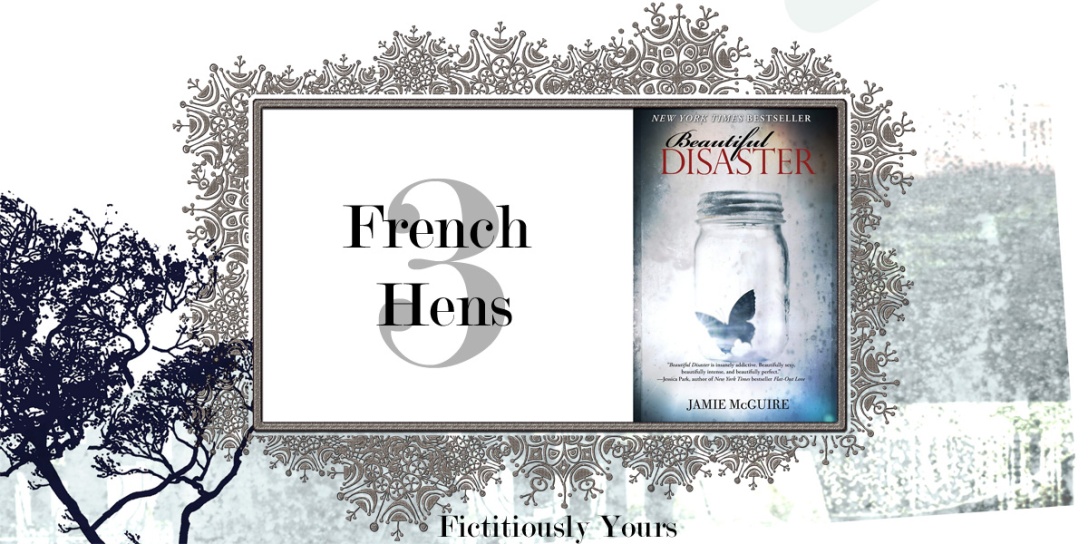 This book, Beautiful Disaster by Jamie McGuire, repeatedly caught my eye since I first encountered its alluring cover but I never carved out time for it until coming across it again at the library. Walking to the check-out counter, I knew it was going to be trash. But it kept popping up, so I finally had to read it. And once started, I had to finish it. I hate-read the last two-thirds of it at least. I don’t pretend to think there’s much point to my writing this review as there are really thorough and entertaining ones already on Goodreads, but if it’s not going to be my most enjoyable review, at the very least you can not-enjoy yourself with me.

Our story begins at an illegal underground college fight club where the reigning champion bareknuckle boxer is a law or criminal justice student or something. It doesn’t make any difference, because these people’s interests don’t actually contribute to their character or the plot in any way, it is just another external feature, like their chiselled jawline or stacked figure. So the law student is a member of an illegal fighting and gambling ring, routinely assaulting fellow students in his spare time. Why not.

I’m already going brain numb from writing this review and I haven’t even introduced the main character. Not a good sign, as she is one of the most frustratingly mind-numbing protagonists I have ever read. If the male lead is an unstable nightmare of a person, the female lead is puzzlingly inconsistent and downright contradictory. I suppose it contributes to her mystique. Gag.

Basically what we have here is a cliché within a cliché within, oh look, more clichés. Insta-dislike for no apparent reason between the two leads, check. Forced cohabitation for some spurious reason, check. The girl is not-like-other-girls, check. Basically, all the bad romance clichés make a perfunctory appearance in one form or other, leaving hardly any room between them for an actually compelling story. But an attempt was made.

Abby Abernathy (yes, that is her name, only slightly less dumb than the nickname the protagonist gives her) has a mysterious secret about her past that she tries to hide. And it’s somehow reminiscent of the behaviour of her new boo, Travis “Mad Dog” Maddox (I cannot make these names up, but Jamie did), which is part of why she knows she shouldn’t get involved with him.  Honestly, the hints about her deep dark secret were all that kept me reading through some of this drivel—and then it’s the most underwhelming secret possible, that doesn’t really parallel what’s going on with her and Travis except in the most vaguely peripheral way.

What else can I say? Some of the secondary characters were realistic and likeable, some of the dialogue was surprisingly smart and entertaining, some of the moments of self-awareness on the part of the protagonist were laudable. Basically, there were some moments of lucidity, reason, and basic social normalcy displayed that made the rest of the “romance” just seem that much more bonkers. The whole thing was like a series of manufactured conflicts that the characters just generated for themselves out of nothing when things got too steady and functional. Whoops, need some conflict here, cue the rollercoaster ride of dysfunction again.

The logic was severely lacking and the whole book could have ended satisfactorily so many times, but no, it had to drag on, repeating the same patterns of toxic behaviour (on both sides, I might add) and completely reverting to things we thought (naively) that we had moved on from. In the end, the characters were caricatures who hadn’t really learned anything or arrived at anywhere different in their relationship than they had already been three times during the course of the book, giving us no hope whatsoever that they will continue on any differently. Yay.