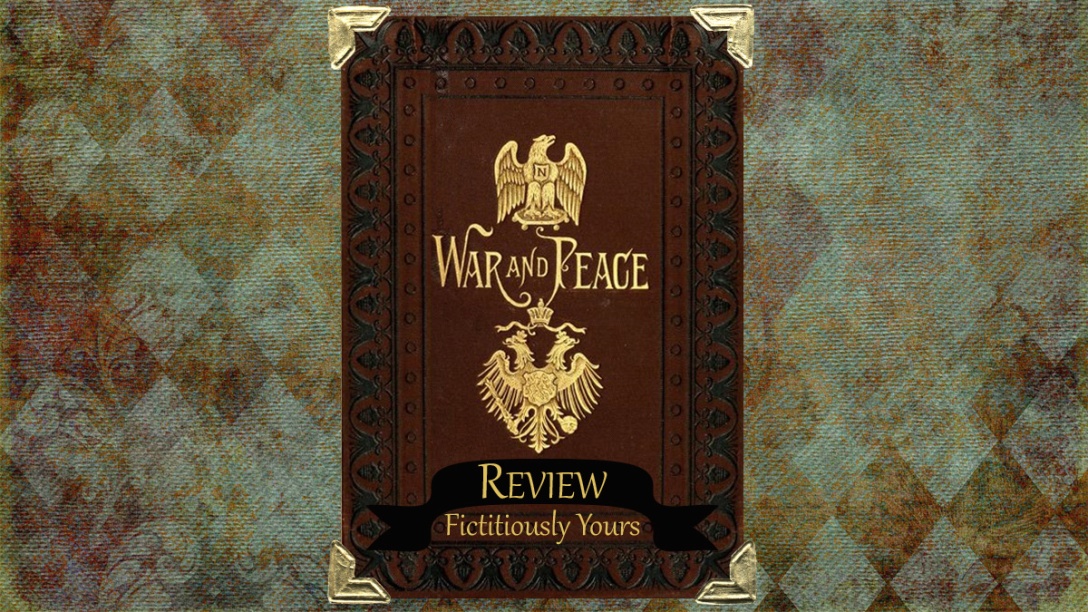 The “I can’t find a blurb because everybody already knows or doesn’t care what this book is about” solution: An Encyclopedia Britannica entry on War and Peace by Leo Tolstoy

War and Peace, historical novel by Leo Tolstoy, originally published as Voyna i mir in 1865–69. This panoramic study of early 19th-century Russian society, noted for its mastery of realistic detail and variety of psychological analysis, is generally regarded as a masterwork of Russian literature and one of the world’s greatest novels.

(I know that does next to nothing for saying what it’s about, but trust me, there’s a reason. Keep reading.)

This tome has added such a burden of words to the world that I feel it is simply exacerbating the issue to add any more by discussing it. Alas, pics or it didn’t happen, amiright? Review or I didn’t read it. Perhaps, in the grand scheme of things, W & P is not the ponderous brick of a book that it is made out to be. In the realm of nineteenth century literature, much of a similar cast and wordiness is to be found. However, there is a particularly un-plotlike, meandering, and historical style to the writing that at times confounds any attempts at relating to the characters or caring about them, their problems, relationships, or anything at all, really.

There are so many characters weaving in and out, that I can’t even begin to touch on them all. Some of them I really quite liked, like Denisov, a friend of Nikolai’s. Boris’ arc was interesting, though he was a bit of a glum, doom-and-gloom character. Helene’s story meandering in and out was compelling and her end rather tragic. Some appeared for a while with regularity, and then dropped out (or died, go figure), others showed up late to the party and we’re suddenly with them closely for a long time as though they’re now the central character. It’s a mess really, on an epic scale.

There aren’t many main characters I could point out as really liking for any prolonged period of time. Prince Andrew begins as an insufferable prick who despises his wife, evolves into a somewhat reformed okay-guy, only to descend back into insufferableness. The relationship that really got me steamed was that of his sister, Princess Mary, and their father, who torments Mary in every way possible because he is seemingly incapable of showing the affection we are supposed to believe he feels. Okay, then.

Pierre—oh, Pierre. I liked Pierre, with all his cumbersome, lumbering stolidity. I do blame him for getting peer pressured into marrying a woman he knew he didn’t want to marry, and then taking it out on her when he’s unhappy with the arrangement after the fact. Brilliant work. And he’s a bit of an unhinged dreamer. But his friendship with Prince Andrew was part of what redeemed Andrew for a time in my eyes, and Pierre was always quite well-intentioned and unassuming. Until he decided to kill Napoleon, but that made for interesting character development.

The Rostovs are a pack of generally naïve young things, even the parents, who gallop along through life without much thought of consequences. Natasha is likable as she goes through believable stages and changes, but her ending to me didn’t feel quite right. Her brother Nikolai turns into an almost Prince Andrew-type personality, which is perhaps understandable in that he ends up married to Princess Mary. Natasha’s other brother, the 16-year-old hothead Petya, made me cry, and I don’t want to talk about it. Sonya, though not a Rostov, is a poor relation (really, they’re just as poor as she is, but they still have their status, power, and all the accoutrements of wealth in society) who is part of the household, and her development annoyed me no end. Originally engaged in a mutually loving promise to marry Nikolai, she is thrown over because the Rostov family are ruined and Nikolai needs to marry rich in order to save them and repay their creditors, which come howling for their coin as soon as the father dies. Hence, Princess Mary, who we are supposed to believe is actually in love with Nikolai, and he with her, but that never really convinced me. Sonya gets a raw deal, and is pretty much written off as a fixture of the furniture for the family with no thoughts, desires, or will of her own.

For a character I hated but loved to hate—Dolokhov. He gives terrible advice to Prince Andrew, is generally a bad influence on everyone, and comes to a clash with Pierre that leads to a duel. And then after that, he barely gets the time of day, except to be mentioned as one of the men that goes into a battle near the end. He’s also a daredevil who infiltrates enemy lines for information, which gives him, well, daredevil appeal. I just wanted more character development. But he wasn’t one of the good ones, so he didn’t deserve a lengthy dénouement.

As for the plot—well, there isn’t one. It’s more about the setting. Which is, the culture and society of Moscow and St. Petersburg (mostly Moscow), which was deadly dull on the main, and the Napoleonic wars. And, oh, boy, Tolstoy has a view on that. Mainly, I found his digressive ramblings about cause, effect, fate, and free will to be interesting mental exercises, and there is no doubt that Tolstoy was very knowledgeable and invested in this subject. However, there comes a point when you need to cut the philosophy that doesn’t directly affect your narrative and put it in an essay.

Initially, I just wanted the party scenes the book starts with to end. They just go on and on and I have no context for any of the characters or the issues they are talking about, so it’s a struggle to engage. I was excited when we finally go to the war part of it, as at least there was some more immediate conflict and characterization that was taking place. There are some particularly enjoyable sequences just about halfway through, between one Napoleonic war and the next, involving a hunt and a masque-ish event with the young people. Some of the scene setting, the flashes of lucidity that come to characters during battles, or specific moments of revelation, really hit me and I thought I could see why this book is such big news. Nearer the end, in summary type intervals, certain understatements about society and the personalities within are very astute and compelling, revealing more than actual scenes sometimes did.

But then, it kept devolving again into minutiae and bland recitations of troop movements from point A to escarpment J7, percentage of losses for and against the Franco-Prussian-Italian-German alliance subsection 82 under General Aloysius Paisley (except there weren’t Irish people in it—perhaps if there had been… no, we don’t need another Ulysses), or the morale of the embattled legions on the first instance of Maytember 16th. And the conclusion of the few core characters didn’t seem earned so much as convenient, so that also made me feel a bit put off. If anything, their fitting endings should have been able to salvage a lot of the emotion that we were just bored out of feeling by the other parts, but unfortunately, they didn’t for me.

All in all, I’m glad I read it, but I think I’ll stick to Dostoyevsky in future for my Russian literature fix, so I don’t see Anna Karenina on the horizon.

4 thoughts on “It Got Involved: War and Peace Review”